skip to main | skip to sidebar

Posted by Daniel Oblak at 22:48 No comments:

We've been living right at the foot of Black Mountain and we have used the tower as a beakon whenever we could not find our way home. Now, we thought we ought to pay a visit to the summit and see it close up. We went up along the winding road, paid the entrance fee to the tower, and rocketed up the lift shaft! Actually, paying an entrance fee felt so unusual to us, as everything else in Canberra is free. Anyway, the view from the tower was really great. The tower itself is not that tall, but the fact that it sits on top of a hill contributes significantly to the quality of the overview from the top.

Posted by Daniel Oblak at 21:13 No comments:

As Canberra was constructed from scratch there was a good opportuinity for nations who wanted to establish diplomatic ties with Australia to build their embassy buildings in some characteristic style. Needless to say, not all embassies are particularly interesting, but a couple are very nice indeed. Here's a couple to begin with.

Posted by Daniel Oblak at 21:09 No comments:

In another effort to get out of town we rented a small vehicle for the weekend and took it for a spin. Other than being a first-time experience in left-hand driving and automatic gearing, it was also our first independent quest into the bush. Not to be left solely in each others company, we asked one of our freinds Warn to come along with us. The destination of the day was the Tidbinbilla Nature Park around 50 km out of Canberra. The nature park features various Australian animals and nice scenery. Below are pictures of some of the fauna we encountered.


And now for something completely different!

Posted by Daniel Oblak at 21:08 No comments: 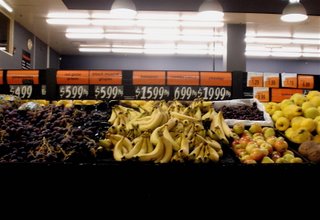 In Australia these days Bananas appear in discourses about global climate change and in debates about inflation and interest rate levels. Yep, this curvy yellow fruit... or rather one would think its peel is golden. The reason for all this fuss is that the kg price of bananas is currently hitting around 16 AUD, which is roughly eqivalent to 70 DKK. One banana will set you back about 4 dollars i.e. about 20 kroner!!!

How come? as Australia surely has the climate to grow bananas... Well, the reason for all this conundrum is that in March this year Larry came in from the Indian Ocean and passed over Queensland in the north of Australia. Larry was a tropical cyclone - and Queensland is where all Australia's bananas are grown. The cyclone left behind a costly trail of fallen banana palms. Because of the country's draconic import restrictions, no bananas can be imported from anywhere overseas. Though, after having been approached by Phillipine banana farmers the authorities are thinking about allowing some imports of bananas from abroad. They figure that the formalities of approving farmers and setting up control procedures could be in place in - about 6 to 12 months! So, bananas remain a truly exclusive delicacy for some while longer.
Posted by Daniel Oblak at 21:38 No comments: 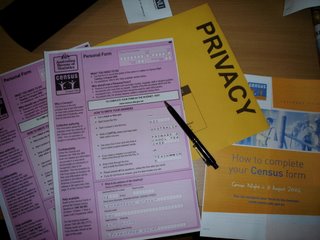 As it happens, we're staying in Oz during the time of the census, which is held every 5 years. That's right, they do have censuses here, as they say that it is still the most reliable way to record everybody living in Australia. Persons who need to fill out a census form include tourists, ship's crews and other visitors. Yeah, its practically everyone except embassy staff. So tonight on the 8th of August we answered the questions about our ancestry, religion, education, income, hours spent on housework and so on all in order that we become engraved into the Australian history.
Posted by Daniel Oblak at 23:06 No comments:

This Saturday's destination was the Old Parliament House. This building served as the centre of federal power in Australia from when Canberra became the national capital in 1927 till as late as 1988 when the new Parliament House was finished.

Posted by Daniel Oblak at 22:20 No comments: